At present, the domestic epidemic situation is spreading in many places, and at the same time, various regions have also stepped up prevention and control measures and adhered to the action of "dynamic clearing". All of these have a certain impact on the production, transportation and sales of enterprises.

The feather and down trade has also been impacted by the general environment. Uncertain factors have disrupted the normal supply and demand relationship, making both upstream and downstream manufacturers wait and see. It is worth noting that with the improvement of market traffic control and investment sentiment, the price of ducklings has rebounded for several consecutive days.

China's textile and apparel market is based on "three points for domestic demand and seven points for exports", and since the Sino-US trade war started, the speed of end customers placing orders has slowed down significantly. The good news is that the United States has restored 352 tariff exemptions for Chinese imports, which undoubtedly gave the textile market a shot in the arm.

The U.S. exempts 352 additional tariffs on China, and some down, feathers and their products are included in the list

On the 23rd local time, the Office of the United States Trade Representative issued a statement announcing the re-exemption of 352 additional tariffs on imports from China, which will apply to imports between October 12, 2021 and December 31, 2022. Goods from China.

In October last year, U.S. Trade Representative Dai Qi announced plans to re-exempt tariffs on 549 items imported from China, and sought public comments on this. However, this time only 352 of the 549 Chinese imports were confirmed. 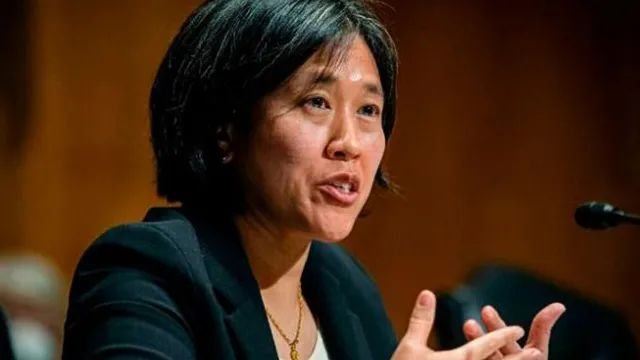 This waiver is retroactive to October 12, 2021 at 12:01 a.m. EDT, and further extensions may be considered at discretion.

Among the 549 imported commodities that are not included in the 352 exemption list, there are still 0505.10.0060 goose and duck feathers for stuffing (see the table below for details):

The spokesperson of the Ministry of Commerce said: In the current situation of rising inflation and challenges to the global economic recovery, we hope that the United States will proceed from the fundamental interests of consumers and producers in China and the United States, cancel all additional tariffs on China as soon as possible, and promote bilateral economic and trade cooperation. The relationship is back on track sooner rather than later.

The link to this USTR announcement and the list of tariff-exempt goods is: https://ustr.gov/sites/default/files/notices/FRN%20for%20Notice%20of%20Reinstatement.pdf

Bosideng ushered in the "spring" of export sales

Although the "cold spring" of the new crown pneumonia epidemic is still severe, as a world-renowned brand of down jackets, the Bosideng Group located in Changshu City has ushered in the "spring" of export sales.

In the production workshop at the headquarters of Bosideng Group, sewing machines are running at high speed, and workers are busy in an orderly manner. In the first two months of this year, Bosideng has exported 30.763 million yuan of textiles and clothing, an increase of 11.5% year-on-year. 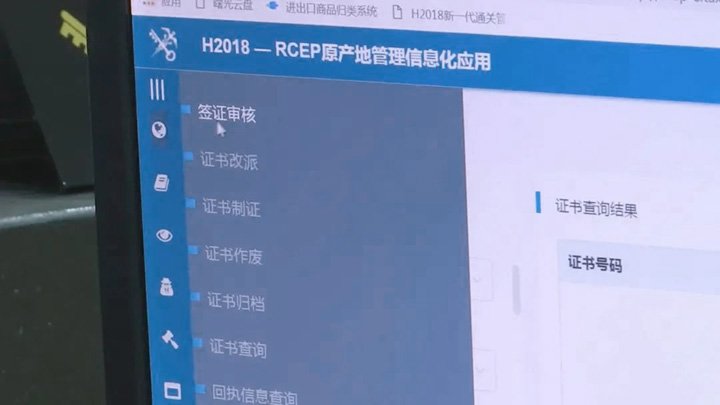 "Now our garments are mainly exported to North America, EU countries and the United Kingdom. Since March, our export volume has gradually increased. It is expected that a large number of exports will begin in April, and the peak export season will continue until September. "Bosideng Foreign Trade Division Shipping Management Manager Xu Fuming introduced.

Xu Fuming also happily calculated: "We have made reasonable use of the free trade agreement to obtain more benefits. In the first two months of this year alone, we have enjoyed tariff concessions of about US$22,000 by applying for the FTA preferential certificate of origin. Let's wait. Orders exported to Japan are being shipped one after another, and according to the RCEP tariff reduction policy, we will also enjoy at least US$37,000 in tariff concessions.”

Export statistics of down and feathers in major provinces and cities from January to February, the export volume in January surged year-on-year

The export volume from January to February, Anhui ranked first in the country, and was the highest in the same period in the province since 2017. 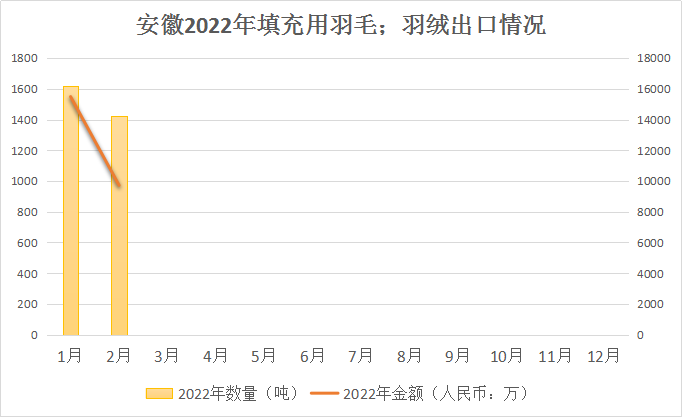 From January to February, Zhejiang ranked first in the country. 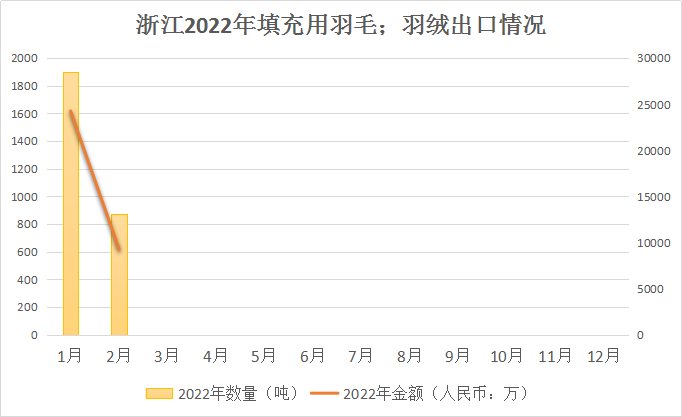 Exports from Jiangsu continued to decline.

Jiangsu Province exported 896.5 tons of down and feathers from January to February, down 16.3% from last year; the export value was 136 million yuan, up 78.6% from last year. 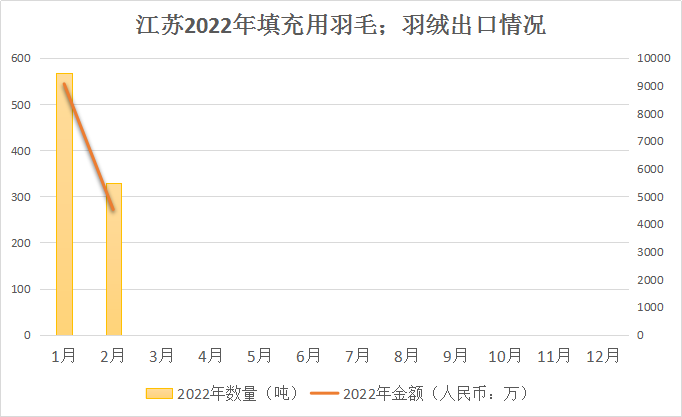 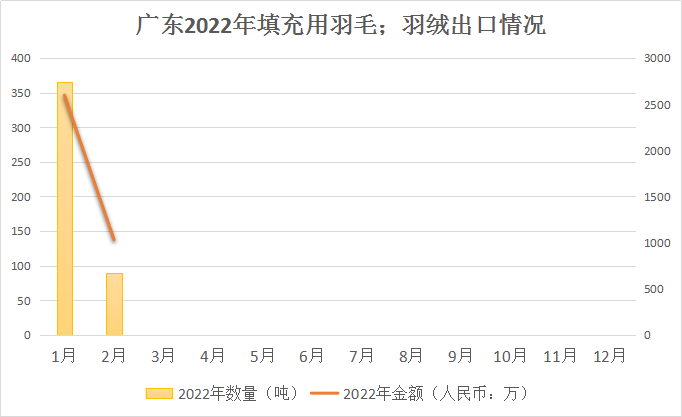 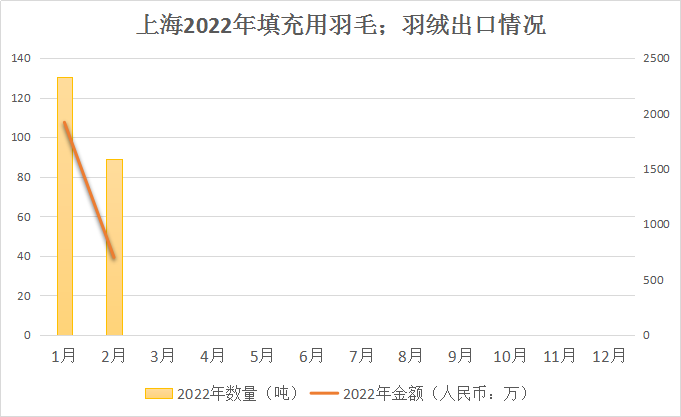 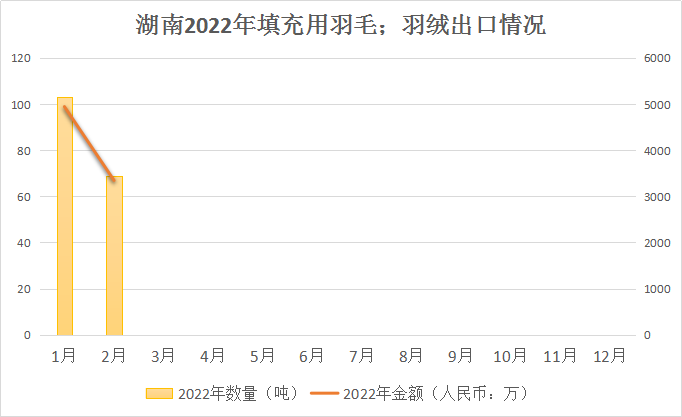 Orders for hotel down products have fallen significantly

At present, industries such as hotels and tourism have been significantly affected by the epidemic. 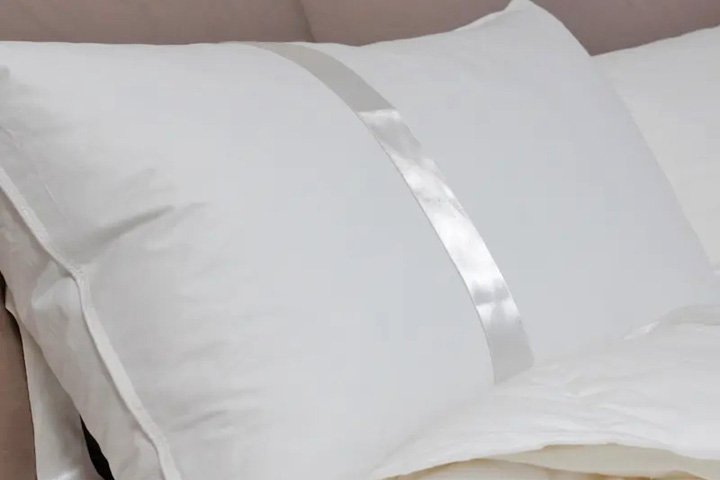 In the past, more than 70% of the orders of Foshan Bariya Down Products Co., Ltd. (hereinafter referred to as "Baliya Down") came from hotels. At present, under the influence of the epidemic, hotel orders have declined significantly, and only about 10% of the production capacity can be met.